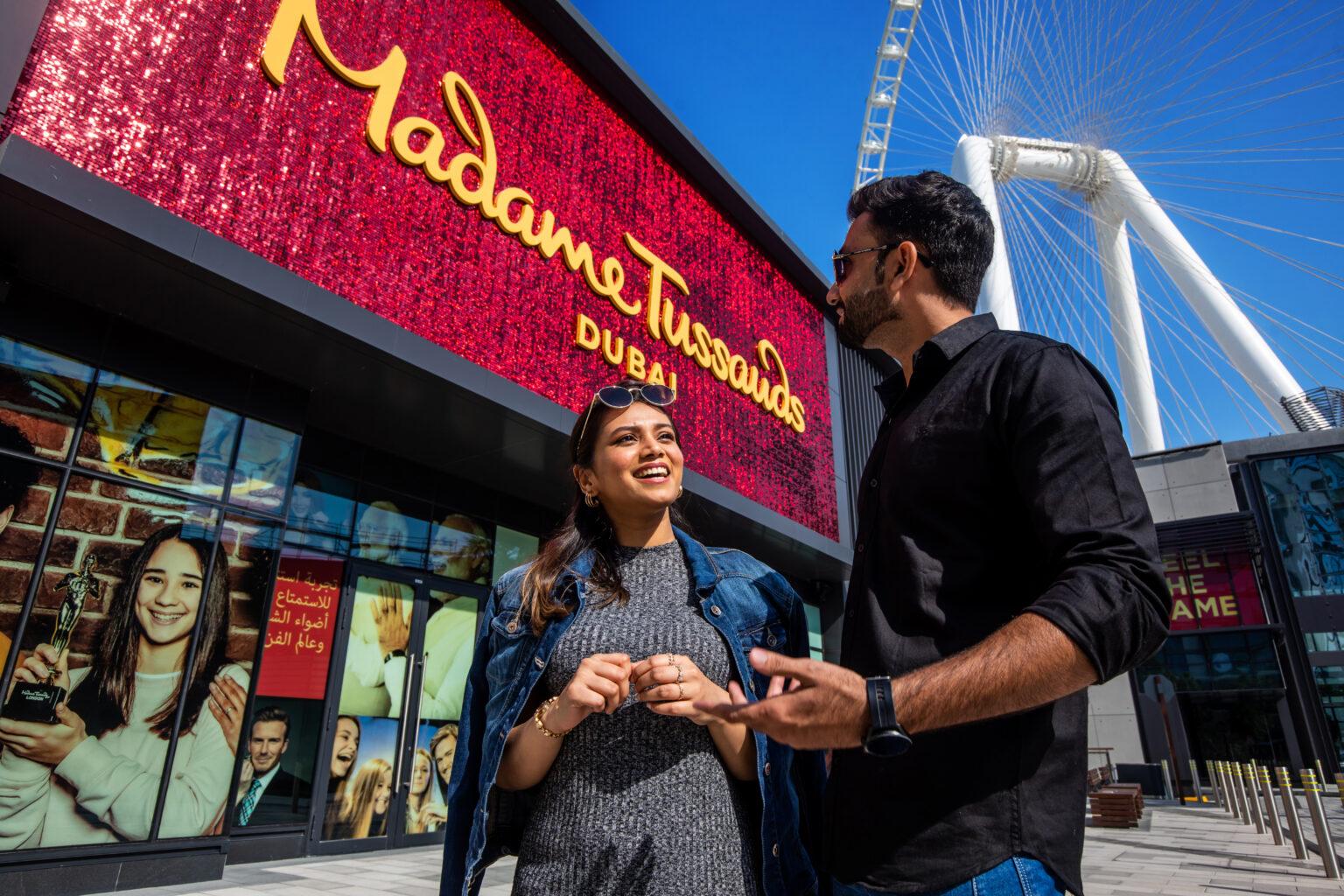 Meet your favorite stars from music, film, politics, or sport at Madame Tussauds in Dubai. A world of celebrity fun awaits you!

Meet your favorite stars from music, film, politics, or sport at Madame Tussauds in Dubai

Have you always wanted a photo with your favourite star?

Welcome you to the star-studded party of a lifetime!  Feel the fame and be the star. Get up close and interact with your 60 favourite superstars.

You can also book the Madame Tussauds Guidebook in English or Arabic.

Who can you meet at Madame Tussauds Dubai

A world of celebrity fun awaits

These are just a few famous names you can meet at Madame Tussauds in Dubai. Plan about 60 to 90 minutes for your visit so that you can see everything in peace.

What safety restrictions will I see in place when I visit?

We would like to reassure everyone that we are continuing to take the necessary measures to provide a safe and hygienic environment. The health and safety of our guests and staff is our absolute priority. We have implemented an extensive range of safety measures, designed to ensure a happy, safe, and healthy experience for all guests and staff. These include:

Can I bring food and drinks inside the attraction?

Unfortunately, food and drinks are not allowed inside the attraction.

Can I take a baby stroller inside the attraction?

Yes! The attraction is stroller-accessible

Is there an age limit?

Madame Tussauds is a family-friendly attraction, and all ages are welcome

What is the ticket price for people of determination?

Guests who are people of determination can enter for free and a caregiver can purchase a ticket at the attraction.

I have pre-booked tickets but am now unable to visit, what should I do?

It is easy to revalidate your ticket to visit on a later date. Our booking guarantee allows you to move your ticket up to five times, with the flexibility to move bookings up to 24 hours before your arrival time.

How to find Madame Tussauds?

These are the ways to get to Madame Tussauds in Dubai

Follow the E11 highway and take the turn-off for Bluewater Island.

There is a large underground car park.

There are no reviews yet.

Only logged in customers who have purchased this product may leave a review.

There are no enquiries yet.

Go to your Basket

If you want to experience the enchanting secrets of the Arabian Peninsula, we support you with a large selection of tours and activities for a successful vacation in the United Arab Emirates directly on the Arabian Gulf!

Grab you the best Offers!

We use cookies on our website to give you the most relevant experience by remembering your preferences and repeat visits. By clicking “Accept”, you consent to the use of ALL the cookies.
Do not sell my personal information.
Cookie SettingsAccept
Edit Cookie Settings

This website uses cookies to improve your experience while you navigate through the website. Out of these, the cookies that are categorized as necessary are stored on your browser as they are essential for the working of basic functionalities of the website. We also use third-party cookies that help us analyse and understand how you use this website. These cookies will be stored in your browser only with your consent. You also have the option to opt-out of these cookies. But opting out of some of these cookies may affect your browsing experience.
Necessary Always Enabled
Necessary cookies are absolutely essential for the website to function properly. These cookies ensure basic functionalities and security features of the website, anonymously.
Functional
Functional cookies help to perform certain functionalities like sharing the content of the website on social media platforms, collect feedbacks, and other third-party features.
Performance
Performance cookies are used to understand and analyze the key performance indexes of the website which helps in delivering a better user experience for the visitors.
Analytics
Analytical cookies are used to understand how visitors interact with the website. These cookies help provide information on metrics the number of visitors, bounce rate, traffic source, etc.
Advertisement
Advertisement cookies are used to provide visitors with relevant ads and marketing campaigns. These cookies track visitors across websites and collect information to provide customized ads.
Others
Other uncategorized cookies are those that are being analyzed and have not been classified into a category as yet.
SAVE & ACCEPT
Powered by