Our Topic today: Road traffic in the United Arab Emirates 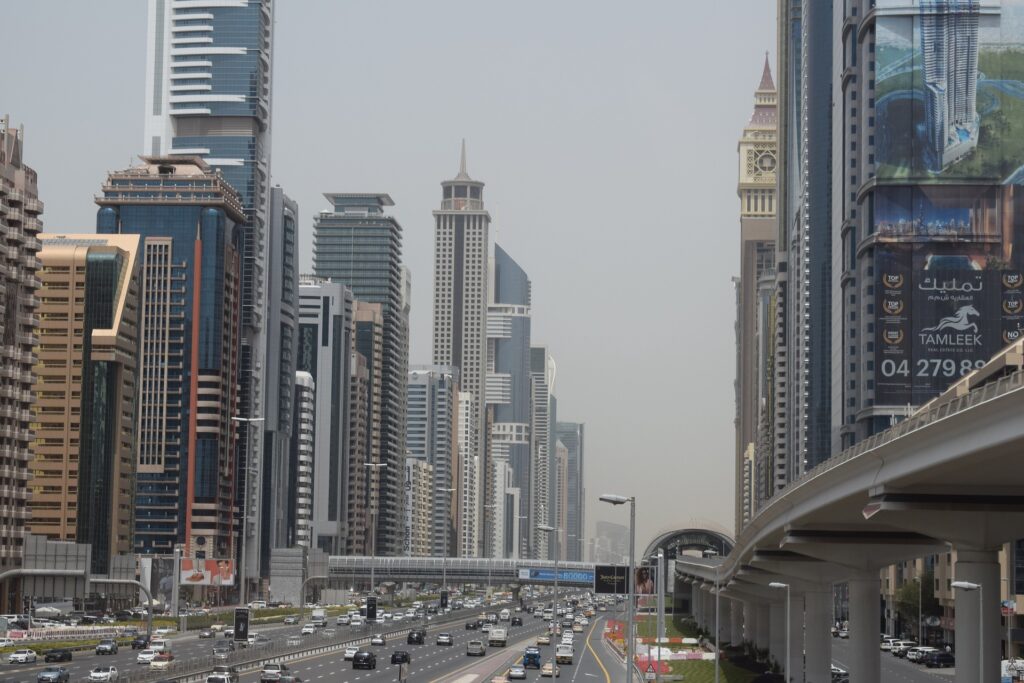 Basically, it drives excellent in the United Arab Emirates. A generous infrastructure, the good quality of the roads, the similar German road traffic regulations and right-hand traffic help you to find your way around quickly.

Nevertheless, there are a few things to consider in order to get to your destination safely and accident-free in road traffic in the United Arab Emirates.

The basic speed in the city is 60 km / h on residential streets and 80 km / h on main roads. At some points 50 km / h are signposted. Places where the speed has to be reduced are marked with so-called “humps”. Hump ​​means hump or hill. These hills are usually indicated beforehand by road signs. And it is actually advisable to drive over it very slowly. On the one hand, because they brake in front of you and on the other hand, so that your car is not damaged or throws you off the track.

The maximum speed on the expressways is 140 km / h. The corresponding permitted speed is also indicated by traffic signs. There is only one expressway that allows 160 km / h as a maximum speed and that is from Abu Dhabi to Al Ain.

The streets are all equipped with numerous speed cameras and cameras that record the speed limit. The speed camera density is sometimes 2 km, which means there is a speed camera every two kilometers. Speeding is treated differently in the individual emirates. While there is a zero tolerance limit in Abu Dhabi, for example, there is a 20 km / h tolerance on all roads in Dubai.

Since we’re on the subject of tolerance: the tolerance for alcohol is 0 per thousand in all emirates.

Despite severe penalties, the maximum speed limit is often exceeded by the residents. So be forewarned and still stick to the rules.

What traffic signs, signs or signals are there in road traffic in the United Arab Emirates?

Basically, the signs, traffic lights and traffic signs are similar to those in Germany.

Note, however, that in most cases the traffic lights are not on the stop line, but a few meters further directly on the intersection. But you have to stop at the stop line. So keep an overview at intersections.

Before the green phase ends, it flashes so that you can prepare to stop in good time. However, this should not lead to you hitting the brakes hard when the traffic light is flashing green, because the vehicle following you will not expect this and an accident may occur.

Driving through a traffic light when it is “red” results in severe penalties. You should definitely avoid that.

Even so, there are some that deserve special attention. The right of way system, for example. It is almost always regulated with traffic lights.

Smaller streets have a sign showing the right of way street. The street with no right of way has a stop sign. The right-before-left rule of right of way that is common in Germany does not exist in road traffic in the United Arab Emirates.

The signpost system is a bit unusual in some cases. Basically, however, it is easy to understand and luckily it is also labeled in English, so you don’t have to take an Arabic crash course to find your way around.

The signposts are easy to see and show the lanes that you can get into in good time.

All tourist signs are brown. For example, the way to the Falkenhospital or the way to a hotel.

It’s only scary when the sign suddenly shows Dubai while you are on the way to Abu Dhabi. Don’t be surprised, that doesn’t have to mean you drove wrong, there are just many ways to get to Dubai. It only shows you one way to turn if you wanted to go to Dubai.

Many traces and what they mean

One thing you will surely notice very quickly: the wide streets with the many tracks. 4, 5 or even 6 lane roads? No problem!

The right lane is also used here by the slower vehicles. This includes buses and trucks. If you are driving in this lane and a minibus or truck is pushing you because you are driving too slowly, then you have to know one thing: switch to the next lane as soon as you can, because the minibus or truck is not allowed to do that and may try to get you on the right overtaking the hard shoulder. So if you change to the next lane, it can stay in its lane and then overtake you on the right.

Although you will notice very quickly that there are comparatively few trucks on the road traffic in the United Arab Emirates. This is because there is still a so-called Truck Road here (you can sometimes see the signs). You can also use this truck road as a driver, sometimes you can get there faster.

But normally you would have to overtake the trucks and watch out for oncoming traffic. The truck drivers are kind enough to drive quite far to the right, so overtaking is easier. But please do not be surprised if a brisk Emirati overtakes you on the left while overtaking, this is also common practice.

Ok back to the tracks:

The left lane is for the very fast drivers, just like in Germany. Only here do they insist. He will flash your headlights from afar (which is not necessarily seen as a threat, but as a sign) so that you can change lanes in good time. And it will also open tightly if you don’t switch. If necessary, he will then simply overtake you on the right. But this mainly happens on the expressways, where you usually cannot turn left or turn. So there is no need for you to stay on track.

The lanes in between are more moderate, but left-only overtaking is not taken too seriously. So always be careful on both sides.

In road traffic in the United Arab Emirates, pedestrians are not allowed to cross the main roads at any point. Of course, this serves the safety of pedestrians and is also more reassuring for drivers.

To cross there are traffic lights that show the length of the green phase either in seconds or the green man suddenly runs faster and faster. And don’t forget to get the green phase by pressing the button. There are also underpasses and pedestrian bridges. In the residential areas, on the other hand, there are often no footpaths on small streets. The pedestrians run on the street. Particular caution is required here.

Larger intersections often have a right-turn option without traffic lights for cars and they always have wide “humps” for pedestrians, i.e. the bumps that I have already described with zebra crossings. The driver brakes and has to give priority to pedestrians. Then he threads his way into the street he wants to turn into and of course has to give priority to the ongoing traffic. The system is similar to the famous green arrow in Germany.

For cyclists, more and more routes are being equipped with spacious cycle paths. They are usually located next to the footpaths. In smaller residential streets with no cycle paths, cyclists drive on the street to the right.

Child seats are compulsory in road traffic in the United Arab Emirates. First of all, because you will quickly notice that this is not necessarily taken seriously. Every day there are enough examples in the road traffic in the United Arab Emirates of children romping around in the car, children in the passenger seat, children who look out of the window and are not buckled up or in a child seat, children looking out of the roof window, children sitting on the driver’s lap.

The authorities are now increasingly countering this with harsher penalties.

Use phones in the car

Here, too, there are clear rules: it is forbidden for the driver to make phone calls, answer messages, write e-mails, take photos or videos or be in any way busy with his smartphone while driving without a hands-free system.

Anyone caught doing this will be punished and the penalties will be more severe.

Almost everyone here prefers to use the earplugs instead of the speakerphone in the car. Even on the street, almost everyone has a plug in their ear.

As is so often the case, we do not claim to be complete or correct. And some passages should be understood with a wink.

The blog does not claim to be correct or complete. Subject to changes.

If you want to experience the enchanting secrets of the Arabian Peninsula, we support you with a large selection of tours and activities for a successful vacation in the United Arab Emirates directly on the Arabian Gulf!

Grab you the best Offers!

We use cookies on our website to give you the most relevant experience by remembering your preferences and repeat visits. By clicking “Accept”, you consent to the use of ALL the cookies.
Do not sell my personal information.
Cookie SettingsAccept
Edit Cookie Settings

This website uses cookies to improve your experience while you navigate through the website. Out of these, the cookies that are categorized as necessary are stored on your browser as they are essential for the working of basic functionalities of the website. We also use third-party cookies that help us analyze and understand how you use this website. These cookies will be stored in your browser only with your consent. You also have the option to opt-out of these cookies. But opting out of some of these cookies may affect your browsing experience.
Necessary Always Enabled
Necessary cookies are absolutely essential for the website to function properly. These cookies ensure basic functionalities and security features of the website, anonymously.
Functional
Functional cookies help to perform certain functionalities like sharing the content of the website on social media platforms, collect feedbacks, and other third-party features.
Performance
Performance cookies are used to understand and analyze the key performance indexes of the website which helps in delivering a better user experience for the visitors.
Analytics
Analytical cookies are used to understand how visitors interact with the website. These cookies help provide information on metrics the number of visitors, bounce rate, traffic source, etc.
Advertisement
Advertisement cookies are used to provide visitors with relevant ads and marketing campaigns. These cookies track visitors across websites and collect information to provide customized ads.
Others
Other uncategorized cookies are those that are being analyzed and have not been classified into a category as yet.
SAVE & ACCEPT
Powered by